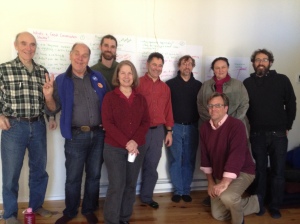 Last week thirteen members of the New England Resilience & Transition Network gathered for an Action Planning meeting in Jamaica Plain, Boston. Folks came from Montpelier, Vermont to Portland, Maine to New Haven, Connecticut, and many places in between. It was wonderful to have representation from near and far.

In the morning we focused on the NERT network itself. NERT now has 44 members across all six New England states! We discussed network engagement, support and inter-connection, in keeping with NERT Goals #1 and #2. We also discussed plans to convene a NERT Advisory Committee to help us stay connected with other networks and glean more information from around the region.

In the afternoon, we focused on NERT Goals #3 and #4: Articulate a Common Story that conveys our vision for a positive future, despite threats of climate change, resource shortages, inequities, and more; and Create a sense of “Network Self-Awareness” among resilience, Transition, and other grassroots groups in New England.

As we navigated this conversation, it became clear that more work needs to be done to clarify the NERT vision for the future, as well as our values. We also dug into the idea of producing a 5-minute video for the network to convey the Story of New England and consider what kind of future we want to build together. We agreed that the video should serve as a conversation starter about the future of our common region. 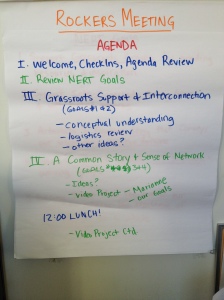 We had a rich conversation, asking ourselves: How does New England’s history position us well for a thriving, resilient future? We noted that there are many examples of inter-connection, resilience, and resistance to oppression in the history of the region that can shape our future in a positive way.

And we also asked ourselves how our region might heal and atone for the grievous sins of the past, including the genocide of the native inhabitants of this land. We noted that without a process of healing, our future will be shaped by these sins, but this time we will be living in a context of declining economic stability, climate change, and resource depletion. Not a pretty picture.

This conversation is far from over; in fact, it’s just beginning. We hope you’ll continue to be involved. To help produce the video, or get more involved with NERT in any way, just email Sarah at sarah@localcircles.org.

Click here to see the full notes from the day.